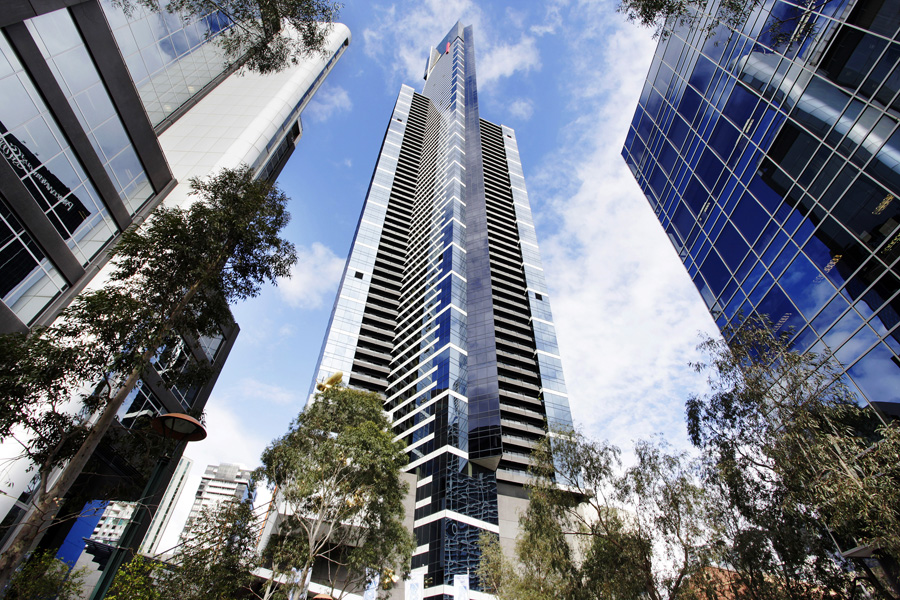 The Eureka Tower is a residential tower block complex on a 52,724ft² (4,900m²) site in the Southbank suburb of Port Philip, Melbourne, Australia. Located just moments away from Southbank Promenade restaurants, cafes and shops, the Arts Centre, Royal Botanic Gardens, Federation Square and St Kilda Road, Eureka Tower brings world-class living to the heart of Melbourne. The tower was developed as a joint venture between Grocon (the constructor), Tab Fried (a Melbourne investor), Nonda Katsalidis and Karl Fender (the architects) who all combined to form a company, Eureka Tower Pty Ltd, which owns the tower.

The tower is named after the Eureka Stockade rebellion during the 1854 Victoria gold rush (the building crown is gold coloured with a red stripe representing the gold and the bloodshed). The horizontal lines on the building represent the markings on a ruler and the blue façade with white lines is supposed to represent the blue and white flag of the stockade.

Construction began in August 2002, the exterior of the tower was completed by 1 June 2006 and the building was officially opened on 11 October 2006. Residents had occupied apartments up to level 80 by July 2006.

The site of construction is an area of reclaimed swampland and the tower has special foundations to reflect this. The tower is 297.3m (984.3ft) high and consists of 91 floors (plus one underground) with 84 floors of apartments and briefly became Australia’s tallest building, superceding the Rialto.

The façade of the building consists of 52,000m² glass and 40,000m² of aluminium panels. The glass is specially designed to reflect heat in the summer but retain heat in the winter and also to be light and durable. The glass skin ‘double glazing’ will reduce heating and cooling costs by 40% in an environmentally friendly manner. The top ten floors of the tower have 24ct-gold-coated glass as a façade.

The elevators for the building were supplied by Otis. In the first stage of the building Otis supplied nine Elevonic 411 elevator systems for installation adjacent to the central core. In addition there are also two Skyway elevators that rise at a speed of 9m/s and can elevate a car to the top of the building in 40 seconds. These will serve the observation decks. The alternative is 3,680 stairs.

The Eureka Tower contains 556 residential apartments of various sizes between floor 11 and floor 87, including some large luxury apartments and penthouses. The apartment levels are divided into three distinct areas within the complex all with separate entrances: floors 11 to 24 are ‘river rise’; floors 25 to 52 are ‘premier rise’; while floors 53 to 87 are ‘sky rise’.

This residential complex has excellent security, including video phone and restricted floor access, 24-hour security and on-site concierge.  The building features a fully equipped gymnasium, a sauna and a private 30-seat cinema.

Between ground level and floor 10, there  residents’ car park for 814 cars (first nine floors), a swimming pool and retail areas. The top nine floors of the complex, known as ‘summit complex’, have public viewing areas, restaurants, an observatory (Eureka Sky Deck 88 at 282m).

The skydeck was opened in May 2007 and features thirty viewfinders an observation terrace and a glass cube which hangs over the side of the building giving people the chance of a ‘ride’. The opaque edge projects 3m over the side with tourists inside and then the glass becomes clear giving a fabulous view of the surrounding buildings and vista.

Two floors are used as service and plant floors. There are also specialised areas, such as the 82nd to 87th floor penthouse apartments (the summit), which are the highest apartments in Melbourne and with one floor dedicated to each cost around A$7m before decoration and fitting out. The foyer is clad in Italian marble with designer furniture and has 6m-high ceilings.

The top of the tower can actually flex around 600mm in high winds and there are two 360,000l tanks of water on floors 91 and 90 to assist in dampening the oscillations set up by the wind.

‘The Bank’ is Southbank’s new addition in high rise luxury living completed in 2011, these deluxe apartments offer a choice of 1, 2 or 3 bedroom configurations. Higher...

The prestigious Vogue, South Yarra is a residential and mixed used development comprising of a retail centre including a Woolworths supermarket, Big W and 45 specialty retail...

Bordered by the picturesque Yarra River, adjoining the popular suburbs of Prahran and Toorak, and overlooking the green oasis of Fawkner Park, is one of Melbourne’s most...

Freshwater Place riverfront position is one of the best in Melbourne. Located on the southern bank of the Yarra River between Southgate and the Crown Entertainment Complex, this...